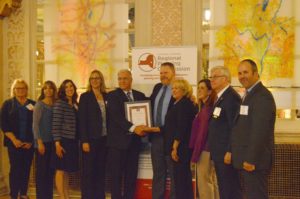 The Town and Village of Stillwater, in partnership with the Capital District Transportation Committee, collaborated to develop zoning code changes and design standards for both the Town and Village along the Route 4 corridor. The Form-Based Code (FBC) effort is the most recent example of intermunicipal cooperation. This project appears to be the only one of its kind adopted in the Capital Region. In fact, this code is one of the few adopted FBCs in New York State and one of about a dozen regional FBCs in the country.

The Town and Village of Stillwater are jointly working together to collaboratively develop new zoning code changes and design standards that promote walkable mixed-use development where there is existing development, protect and preserve rural and historical areas including north of the Village and near the Saratoga Historic Battlefield, and enhance and support economic development and revitalization efforts along the Route 4 corridor. This project will involve updating both the Town and Village zoning codes and result in individual updates for both jurisdictions.

The goal of this project is to create seamless zoning code and design standards that provide regulatory consistency along the Route 4 corridor and support, maintain, and enhance the unique and historic mixed-use, walkable land use/development pattern in this portion of the Town and Village.

This project is the culmination and result of an ongoing/soon to be completed Town & Village Hudson River Waterfront Revitalization Plan, Village Comprehensive Plan Update, and other planning and implementation efforts that have been undertaken by the Town and Village over the last several years.

The Stillwater Study Advisory Committee accepted comments on the Draft Stillwater Route 4 Corridor Rezoning & Design Standards documents through January 14, 2017. The draft documents were presented at the December 6, 2016 Public Workshop and can be downloaded in the Project Documents Library below.